I just installed the CTP1 of Denali. Quite exciting.

At a first glance, I cannot tell I found that many new features which would make me jump up and down (or walk on the ceiling, for that matter 🙂 ).

What would be really a big hit – and I can see it as the upgrade incentive in the future! – is the HADR. If done properly, of course. HADR stands for high-availability and disaster recovery and is a newly designed feature. I have not tested it personally (the feature relies on a clustered environment), but as soon as I get my home virtual cluster running, I will make sure to test the feature.Until then, here is a link to the HADR page in the BOL.

Aside from the HADR, I can only say that a lot of components and features have improved, however there are no big leaps as it was between SQL2000 and 2005. Furthermore, the current UI of Denali brings back memories from way back when I was developing in Visual Studio and I was able to dock / undock my windows and arrange them as I would like. Yes, it is a bit of a dusty old UI, but it is useful. I can imagine how I sit at a workstation with 2 monitors and arrange my SQL Server windows in a comfortable way. 🙂

Other than that, there are plenty of improvements which make the day of the SQL Server DBA and Developer much better:  ‘containment type’ as part of the database object management and others.

There are also many improvements to the Management Studio IU: ‘Trace query in Profiler’, which automatically starts a profiler with a filter to the current user session, so the user can trace its own query, useful snippets and ‘surround with…’ tricks.

Ah, I managed to crash the DTA and the Management Studio itself. And it’s time for bed, anyway. 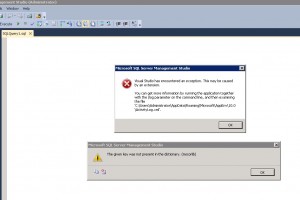 Soon I will blog about the HADR.